I’m so delighted that the project linking my investigations into local clay sources, place and local function to Bruichladdich’s commitment to the concept of terroir, has finally gone live – through their posts about the project on Instagram and Twitter, and on their web-site. I want to thank Jane, Ailsa and Kate for their incredible support and encouragement. It is always a strange process – coming up with a new idea, that might appear ‘bonkers’ to some (I think that’s what one person called it), and then pushing through that scepticism and continuing to share it with other people…. When someone actually gets what you are on about, and gives you encouragement – that is such a vital thing for any maker. It’s not so much permission, more keeping the flame lit inside your imagination, pushing you further, to ask more questions, to respond to your curiosity….

When I had to find another clay source, all my initial glaze making experiments with the Foreland Estate clay were redundant. I had to start again. The new clays from Octomore Farm all warp and pinhole at my usual stoneware firing temperatures (1260 degrees C), and so I had to experiment with earthenware firings and glazes, and lower temperature stoneware firings (at 1200 degrees C). And of course these required a completely new approach in terms of glaze making.

Originally, when I found that the Octomore Farm clays would not fire high enough for using the usual three key ingredients – a rock dust, ash (as a flux) and some clay, I thought I was flummoxed. However, after much research in many glaze books, I found that if I gave myself permission to use a small percentage of frit (a compound used by potters to lower the temperature for the fluxing of glazes), added to the three key ingredients above, then this unlocked new doors for me, and the experimentation could continue……

Thanks to Kate Hannett for use of her pictures here…. 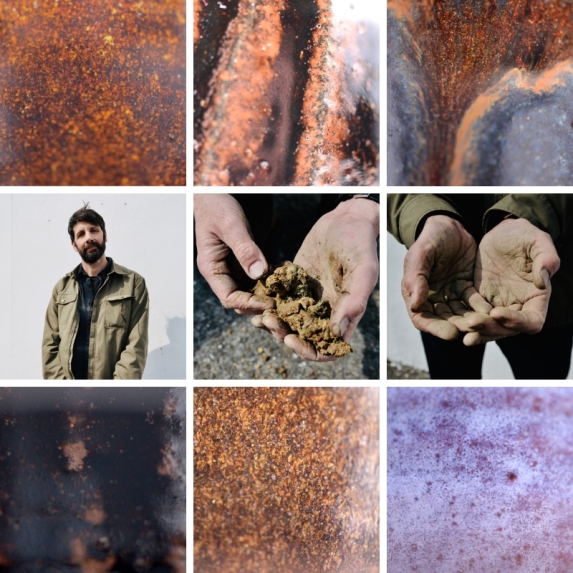 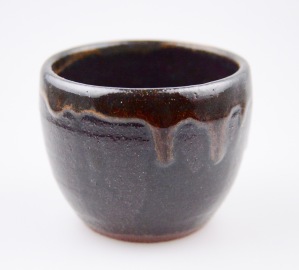 Aubergine glaze with Octomore Farm clay cuach – this glaze uses a metamorphic sandstone rock dust from Granny’s Rock, near Machir Bay, taken from dust excavated by rabbits at the bottom of the cliff face. Courtesy of Kate Hannett

In previous posts, I described the hunt for clay on Islay. I found clay on Foreland Estate, after finding information about the nineteenth century brick and tile works there, on the  excellent Scottish Brick History website. However, sadly the Estate declined my request to dig anything more than the first sample there, and I was left with a challenge – to find more clay, or give up!

Here I have several key people to thank. Firstly, the wonderful Danny Mather, quarryman at Ballygrant Quarry and digger man extraordinaire. Danny had been incredibly helpful when I first went over to Islay, helping me source limestone dust, peat and wood (for ash in glaze making)… but had also said he might be able to help me find more clay. Second, Ailsa Hayes at Bruichladdich Distillery. Without her infectious enthusiasm for this project and all of her work, I would not have had the sense that this project was worth pursuing – worth going out on limb for….  and worth a second trip to find more clay. Both Danny and Ailsa led me to the final person I want to thank, the incredibly generous and inspiring James Brown, farmer at Octomore Farm, provider of well-water and barley for Bruichladdich and now, giving me permission to dig some clay from various locations on his land. Huge thanks to all of them!

The clay I am now using for the cuachan comes from three locations on James’s farm. Two sites on the hill, up above Port Charlotte, and one near the Well of the True Water….. At present, the digging sites are very small, with shavings of clay taken from ditch edges, foundations and one small test pit. If more clay is to be dug in any quantity, we are thinking we might create a small wildlife pond from this small excavation. The local landscape and wildlife are of paramount importance to all of us…… 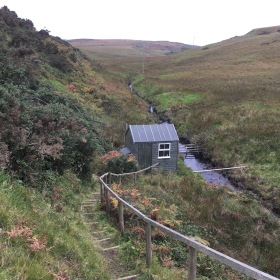 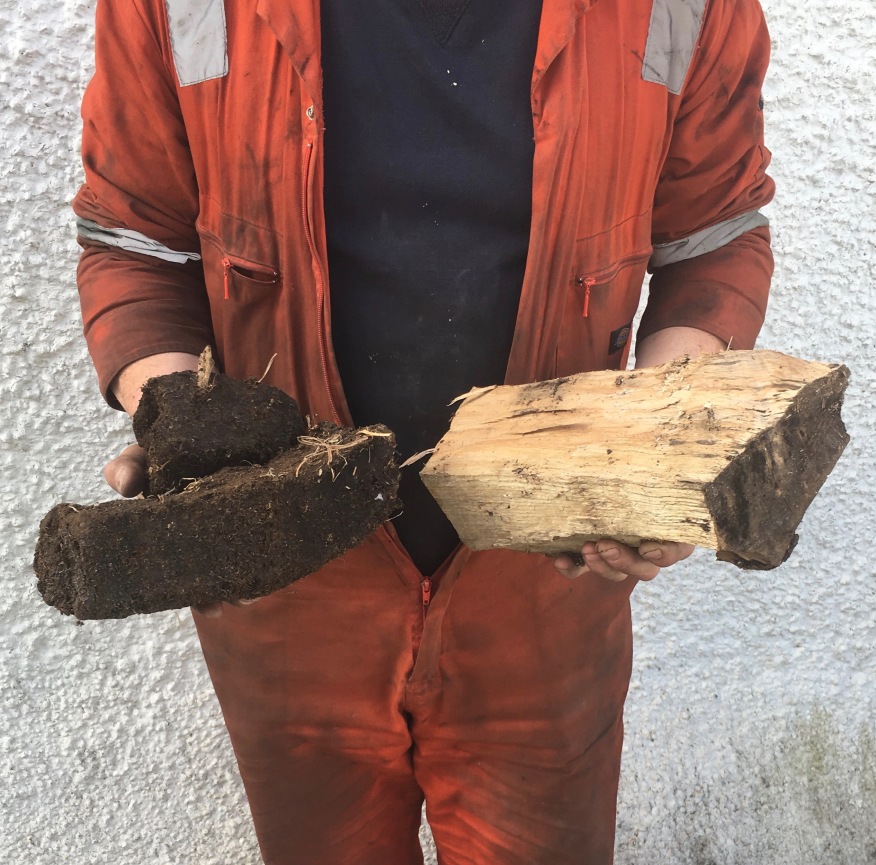 It’s been a while, far too long since I have updated this blog. I’m probably only slightly better at posting pictures on Instagram ( @brakspearceramics ), and need to be more regular in my postings here. I become very obsessed by what’s going on in the workshop; all the different clays I am working with (across several projects – Islay, Leamington Spa, Clee Hill again), and glaze ingredients. Apologies for this. But now there is important news to share – which will follow over the next few posts.

In previous posts, I was tending towards naming my whisky tumblers craggan – following my archaeological investigations on-line. However, I have been reliably informed that this is not really an appropriate term to use – craggan generally being larger and more jar like. And so….. as I prepared for the next, important stage in following up this project, and the enthusiasm coming from the wonderful team at Bruichladdich Distillery, I decided to pursue which Scots Gaelic word(s) would be right for these tumblers.

I would like to thanks the staff at Islay Gaelic Centre, who helped me here. They informed me that a small cup, would be a cuach (cuachan in the plural). And from that day forth – that’s what we have calling the whisky tumblers I have been making. I feel that is very important to choose the right word for these pieces, given how much attention I like to put on building a sense of place. And on this point – I have another apology to make…. In many previous posts, I have been using the spelling – whiskey – the Irish / US spelling for the mercurial dram…. I should, of course have been using the correct Scottish spelling – whisky, for the water-of-life or Uisce Beatha. I’ll be sure to get this right henceforth.

You can read more about the project and the connection between Bruichladdich and yours truly on this page within Bruichladdich’s website.

The picture below is courtesy of Kate Hannett of Bruichladdich – thanks Kate!

A year ago I was talking to a man who used to run a clay materials business in Scotland. The received wisdom seemed to be that there was no clay to be had in the Western Isles. This was not the land of marl and terracotta (like the West Midlands), or ball clays (like Devon and Dorset) or China clays (as with Cornwall)…….

But despite a bit of amateur sleuthing, I couldn’t find much to contradict this view. Until earlier this year. In my research into finding possible clay sources on the Island of Islay, with my interest in making connections with whiskey distilling and culture, I had first discovered the presence of a brick and tile works that existed at Foreland Estate between c. 1840 and 1860, and then, more recently I found references to ‘craggan ware’ in the reports of archaeological excavations across the island, including sites close to my explorations for clay on the Rhinns and Ardnave peninsulars.

The term craggan comes from the Scots Gaelic word crogan or crog, referring to small cups or jars – linked to the word crock in English. Craggan ware is simple, functional and often quite crude in its design and manufacture, fired in peat bonfires and therefore only just ceramic. Simple milk ‘glaze’ was applied when the craggan were hot, helping make them less porous. The same shapes and simple technology can be found dating back to the Neolithic, and Alan Lane has argued that there was a continuous “ceramic zone” identifiable across the outer Hebridean Islands, including Coll and Tiree, that existed up until the late nineteenth and even early twentieth centuries. On the island of Tiree, craggan jars were still made in the 1920s because of the belief that milk heated in these vessels would help stave off tuberculosis, but it is Barvas on Lewis that is the site most commonly associated with the last survival of Craggan ware.

In addition to this, on my last visit to the island in September, I visited the Museum of Islay Life in Port Charlotte and saw a Neolithic cup from the excavation of a nearby burial chamber. This site lies a few fields away from the site of my recent clay digging on Octomore Farm (with kind permission from the farmer James Brown and assistance from Danny Mather). All these threads have come together to inform my latest work, and I wish to explore the idea of making crogan linked to the local traditions of whisky distilling and drinking, and linked potentially to the other key aspects of pastoral economies and milk production and consumption on the islands. This will take both a very functional line, making whisky crogan / craggans for some of the distilleries focusing on their connection to the local land – or terroir as Bruichladdich (now owned by Remy-Martin) term it, but would ideally also lead to workshops with the communities on the island(s), to explore this aspect of a material culture that is now invisible to both local and visitor alike.

View to the Paps of Jura from the road to Ardnave 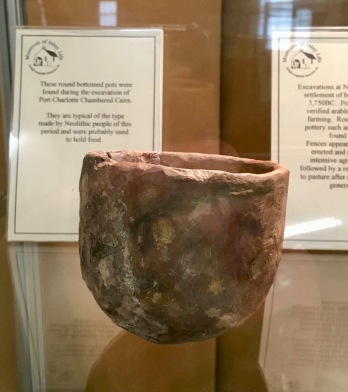 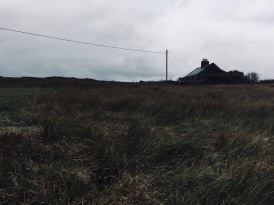 River sands and gravels – but no clay… Laggan Bridge 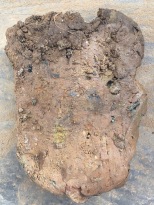 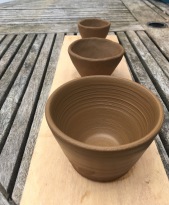 I’m down to the last few bags of my hand-dug Clee Hill clay…. although I’m still hoping I’ll find someone else in the village who’ll let me did some more, or perhaps someone will decide to dig a new set foundations for an extension, or a septic tank and I’ll be able to get a small lorry load….. fingers crossed.

In 2016 I carried out glaze experiments with the dhustone rock dust from the quarry on the hill, wood ash and the clay, working through a very simplified triaxial approach to glaze testing – with some beautiful results. I also have a few bags of samples taken from the soil heaps from the coal workings and some lime rich deposits from the limestone outcropping further down the hill, and so I want to push the experiments a little further over the next few weeks.

Here is a small test bowl with a 75% / 25% mix of wood ash and clay, and the picture I now use as my logo, which has the full set of test bowls and a pancheon with the rare blue chun glaze outcome that I achieved for a few firings…… I find it almost impossible to recreate that effect (the more recent chunning has been more grey than blue). I’m guessing it must have been something to do with the type of timber that I burned in my stove – because nothing else changed? Or did it? 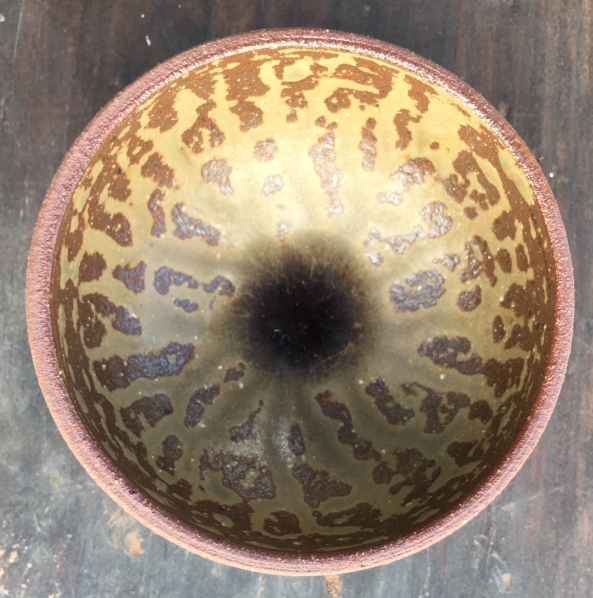 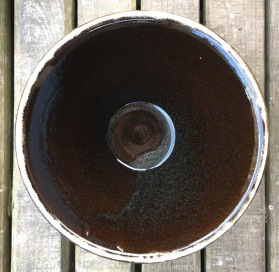